Taking a Closer Look at National Day of Prayer

National Day of Prayer has long been a tradition in the USA, going all the way back to the first call of prayer in 1775 when Congress requested the colonies to pray for wisdom in forming the nation. While things have greatly changed since that time, we still have the opportunity to unite as a country and join together in prayer for our nation, and what an amazing privilege that is!

We celebrate this privilege as we join with our brothers and sisters in praying for our country throughout the day, but also corporately and simultaneously through a prayer to be read at noon (ET) across the nation. 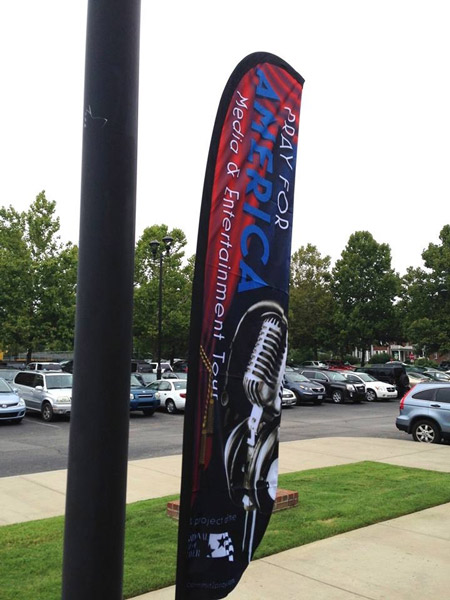 Taking a momentary step back from the National Day of Prayer, and switch over to Local Limelight mode as I introduce you to a client that is dear to our hearts. Don't worry, it will all tie in at the end, I promise.

Dion, has been working with Diers Exhibit from the very beginning. In fact, he was one of my dad's first sales back in 1996. Dion was working with a company called LAS (leisure adventure sportswear) that worked with shows like Veggie Tales and children-related products. As the company grew, my dad was able to help him with new display purchased each year.

We are lucky to have such a loyal client who has been on this journey with us for the past 20 years, and he continues to send us business.

In 2000, he went on staff with a local church called Calvary Worship Center located in Colorado Springs. He served as the associate pastor there for 3 years. Then, he felt called to plant a church in southern Colorado Springs.

Dion commented on his 7 year journey planting the church, "It was a task that God gave me, an assignment."

When he was on staff at Calvary worship center they began to talk about planting a new church. The talk started about establishing some new churches in the strong Calvary chapel presence. We had a calvary chapel all over north, east, and west parts of town. A couple church members got into the car one day and drove down south. There weren't very many churches down in the fountain valley area. The area was a little bit run down. There wasn't a lot 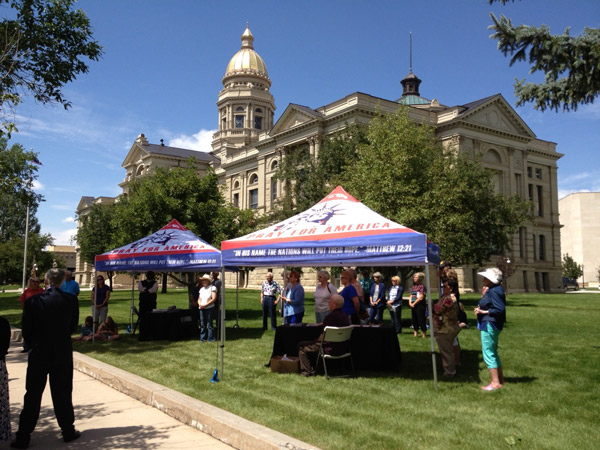 going on because it was such a transient community with a lot of older people.  It was a difficult place to plant churches because the city of Fountain does not affiliate itself with Colorado Springs. Dion's immediate reaction was no, but he decided to think & pray about the opportunity.

He decided to go for a drive one day, and had a vision of houses on both sides of the street. He felt the Lord saying he was going to grow the area, and eventually Dion made the move. He bought a house for his family, packed up, and moved to a new part of town to start this journey. The church was active for 7 years, and in that time, Dion purchased a handful of trade show display products from Diers Exhibit. He had also developed a close relationship with my dad, Jeff Diers.

Shortly after his career change, Dion ended up working with the National Day of Prayer Task Force. At the time they had needed some extra help. He started as a contractor/consultant, and went full time not long after.

Dion commented: "We've seen God do some amazing things. We started to do bus tours every year. Filled with purposeful, intentional, passionate, fiery prayer and it has availed much."

National Day of Prayer (NDOP) was established in 1952 to be proclaimed each year, but did not specify a day. It simply stated that there should be "a day" once a year to pray for our country. The law has been modified a couple times, but it currently reads: on the first Thursday in May people should turn to God to pray for their country.

There are around 45,000 events each year. The goal is to ask for transformation through prayer. Most of the prayer is focused on different spheres that influence our culture. For instance, they pray for people who are governing over us, for the education system, even for our families as they are the greatest influence in our nation. They even go into colleges and universities, businesses, and militaries. 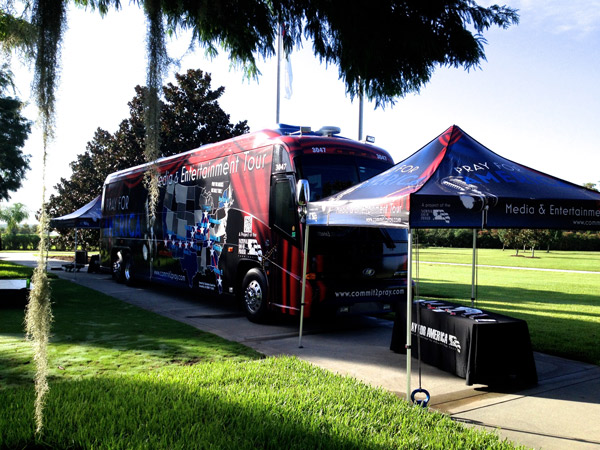 NDOP started bus tours to focus on each one of those spheres. The #1 priority however, is to pray for America. While on tour, they met with leaders and students, and challenged them in their prayers for America. They then had them begin to think about how to pray for their own campus, and how to mobilize to pray more strategically.

Each resource they have utilized to promote the campaign was provided to make a big splash in the local community. Some of the Diers products they currently use in their tours are event tents, table throws, banner stands, and feather flags.

Dion explained: "Without those tools we would not have had the influence that we had."

We are thankful to Dion for his continual support, and business over the past 20 years. We are also thankful that he continues to sacrifice each day to pray for a better tomorrow. This blog is dedicated to National Day of Prayer and to Dion.