“I have recently become obsessed with your honey-based, sunflower-coated TASTY treat called Honey Bunchies. I tried your bar in a Boulder store over the summer, and I ADORE them.” - Cara, San Francisco, CA 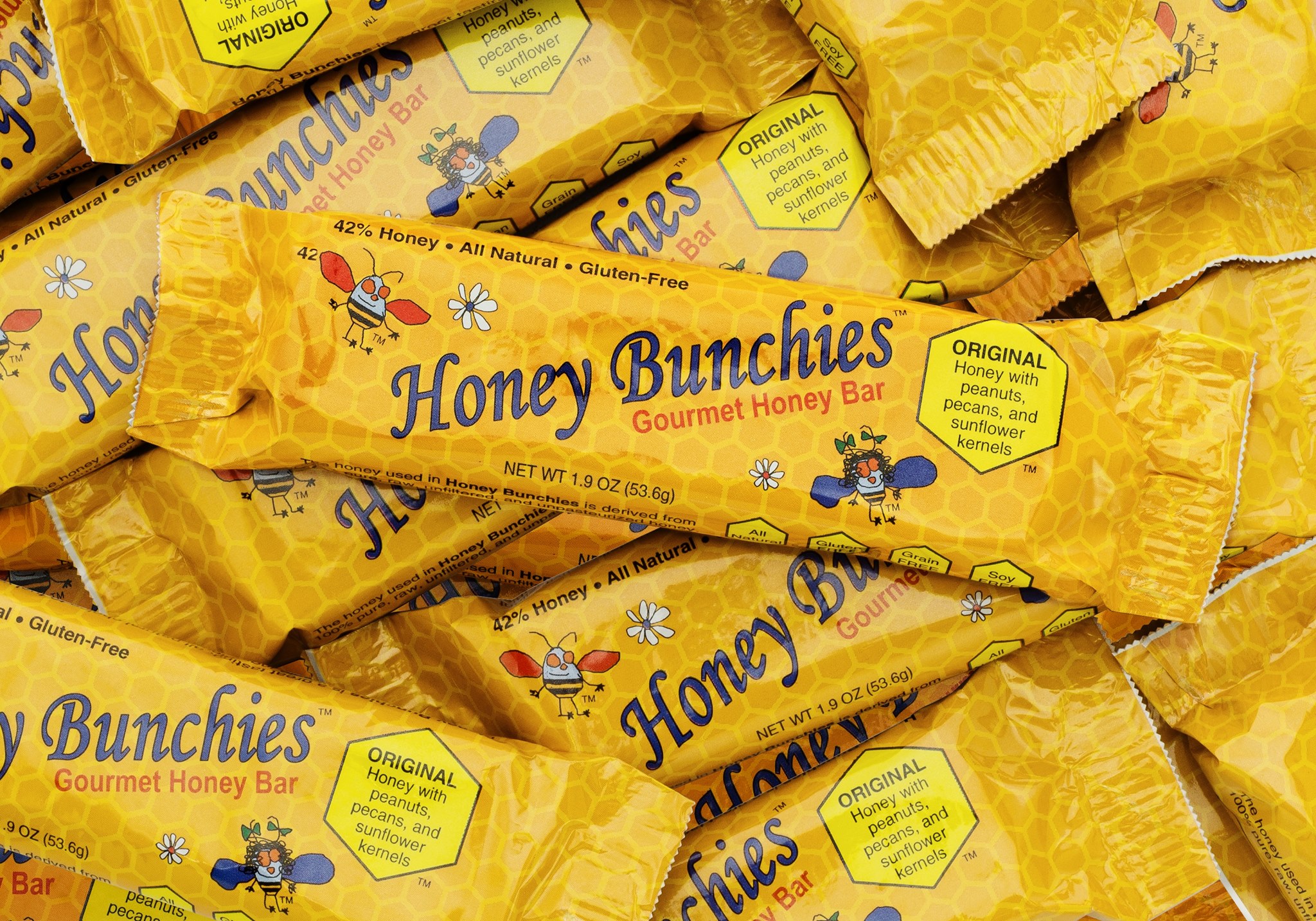 This testimony stood out to me. I pulled it from our client, Honey Bunchies’ website. Two words stood out in Cara’s post: TASTY and OBSESSED. Honey Bunchies is a tasty honey bar that only contains eight ingredients, and is 100% free of gluten, grain, and soy. This tasty snack is 42% pure Colorado honey! The peanuts, pecans and sunflower seeds are just an additional benefit. It is easy to become obsessed with Honey Bunchies, because they are just that good.

So, without further ado we would like to welcome you to the Denver Local Limelight. A new blog brought to you by Diers Exhibit Group (DEG) where we put the limelight on inspirational companies in the Denver area. ORDER HONEY BUNCHIES NOW

Our first Denver Local Limelight is on creators of the gourmet honey bar, Honey Bunchies, a start-up that is just under two years old. Honey Bunchies is based in Longmont, CO and continues to outgrow itself. The story began with Honey Bunchies founder Ed Payne who was a one man show for almost a year. The demand for Honey Bunchies quickly turned the one man show into a family-run company with several employees. Honey Bunchies started up in a residential kitchen, but recently moved into a commercial kitchen. Honey Bunchie bars started in the candy section of a local Whole Foods, and are now available in multiple locations, and orders can be placed online.

Even with the immense growth, Honey Bunchies likes to keep their bars personalized and they continue to package, wrap, and bake every bar by hand.

That’s what I call dedication to excellence!

I was lucky enough to organize a meeting with Kendra, daughter of the owner of Honey Bunchies. We sat down at Starbucks, and as we sipped on Chai lattes, she told me the story behind the tasty honey bar.

Up until a couple weeks ago, Kendra had worked part-time with the company for 10 months, but recently she started on full-time. Kendra gets to utilize her marketing degree from University of Colorado Boulder to help propel Honey Bunchies into a successful future. Kendra spoke with such endearment about Honey Bunchies. She raved about the success and drive of her father, and I hope I can give her words a little justice.

Diers Exhibit Group’s first interaction with Honey Bunchies was in November of 2013. Ed Payne, owner and founder of Honey Bunchies, called DEG to help him create a Custom Table Throw for his local grocery store demos.

Jeff Diers, founder of DEG, teamed up with Ed, and began to brainstorm ways to bring the Honey Bunchies brand to life on a table throw.

"I remember working with Ed very vividly because he came to me with a specific design for his table throw. The table throw was designed with large honey combs that needed to match up perfectly. The design process was unique because Ed had an extremely specific design in mind.” said Jeff. 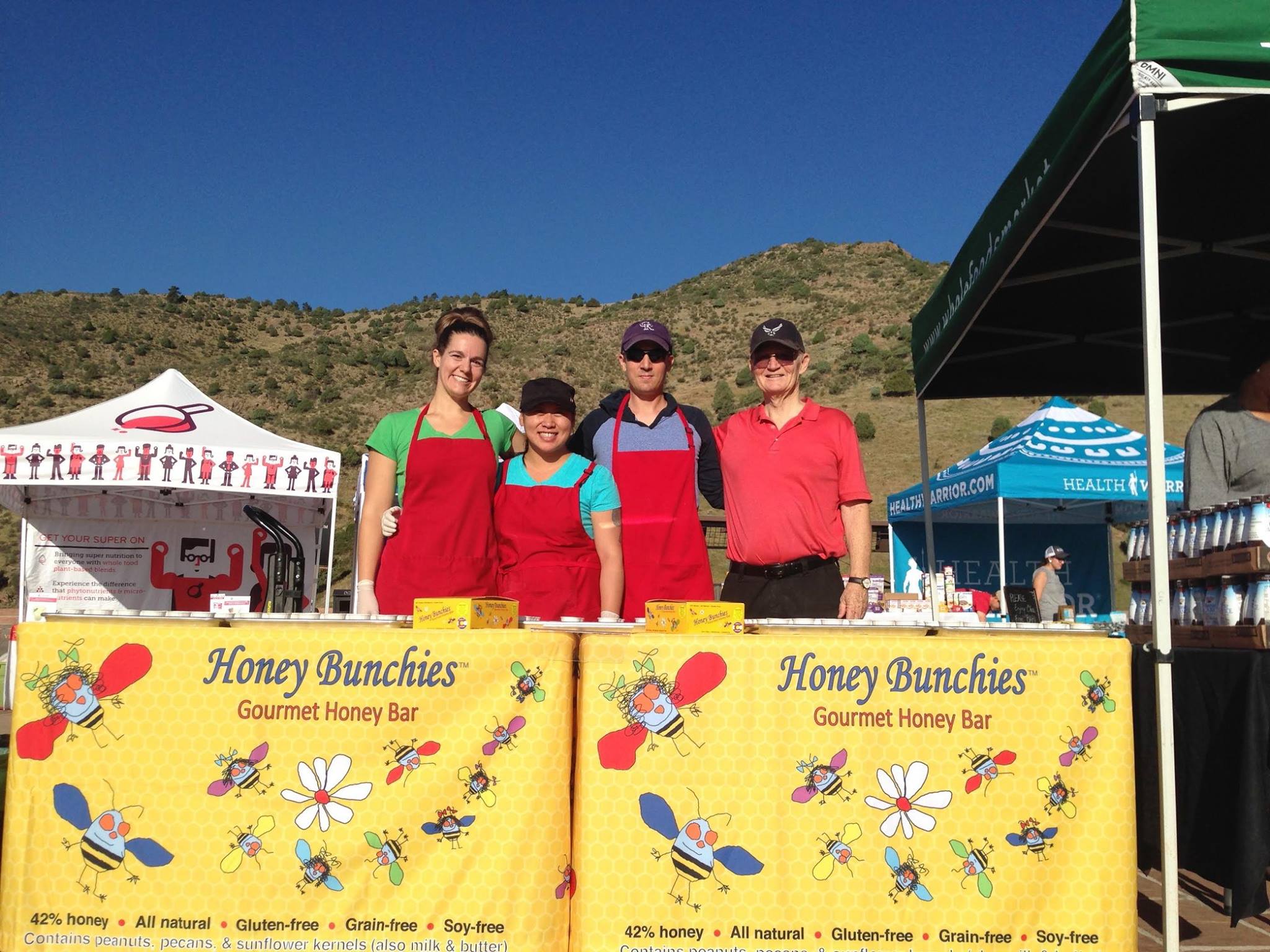 Jeff partnered with Ed, and worked to make sure the table throw would fit his design requirements. Little did Jeff know that DEG was just a small part in what was going to become a largely successful energy bar.

Honey Bunchies has been retailing for about 2 years now, and the demand continues to climb.

The History Behind the Honey...

Ed Payne, former mathematician and fighter pilot in the Air Force, retired 6 years ago. If you knew Ed you would know that he is not the type of guy to retire. He is an extremely driven man who has had his hands in a variety of entrepreneurial companies throughout his lifetime. Years ago he recalled a honey candy that his wife had made for him, and began to experiment in the kitchen trying to make the same honey candy. Kendra recalls that, “He turned into a mad scientist in the kitchen and worked tirelessly to make the exact same candy he remembered.”

The mathematician side of Ed had kicked in. The baking process was notated and calculated. He was an artist at work, the kitchen his canvas, and honey his paint. 3 years later... Honey Bunchies came to life.

In the beginning, the Honey Bunchie bar was more of a bite size candy, but that didn't retail well. Ed went back to the drawing board to make an actual bar. He was still a one man show, and did everything by himself. He worked tirelessly on the recipe and refined it over and over again until it was perfect.

No one in the family was available to help him, so he learned new skills like designing the branding (logo and table throw), as well as all the sales, demos, and book keeping. He demoed at Whole Foods for over a month straight, and kept pushing forward. Ed worked day and night by himself. As I said earlier, he quickly went from his personal kitchen into a commercial kitchen in Longmont. Ed had accidentally made the best snack bar around.

"Our bar is appealing to people who need an energy boost,” Kendra commented. Denver, Colorado is the perfect place to sell a tasty energy bar, as most Coloradans do physical activity year round.

Ed continued to work solo on Honey Bunchies until his son, Edward, came back from Afghanistan after being deployed. Edward started helping his dad run the kitchen, and began overseeing the operations side of the company. Edward’s wife was also interested in the company, and she started helping with operations and deliveries.

This was the beginning of a family owned and run business. The extra help allowed Ed to step back a little bit, but not too much. His passion has continued to thrive.

If you look closely at the Honey Bunchies' wrapper you will see bees, but if you look even closer, you will see the bees were drawn by a young artist. If you take the wings, antennas and stripes off each bee, they become the Payne family, drawn by Kendra in 4th grade. Ed used her drawing for the logo, and named every bee after family members and friends. Honey Bunchies is a family company through and through.

Honey Bunchies has been a HUGE hit! They are currently selling in 18 Whole Foods, along with Denver International Airport, a handful of hotels, and over 200 mom-and-pop shops in the Denver area. They just wrapped up a deal with Vitamin Cottage, and will begin expanding into their stores over the next few months.

I asked Kendra what she sees for the future of Honey Bunchies, and she responded that it will be “hard to imagine where the road will lead, but the important thing is just having fun while enjoying and appreciating the process.”

If your mouth is watering and you have an uncontrollable craving for one of these delicious Honey Bunchies bars, you can find them at any Colorado Whole Foods store in the energy bar aisle. You can also check out this list to find their additional locations. The sky is the limit for this amazing company, and we are lucky to have Honey Bunchies as one of our clients.